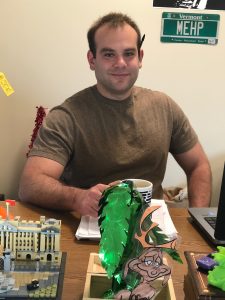 Just over a year ago now I strolled into the then-under-construction front of office of East Meadow School, a squat, unassuming building in Morrisville wedged between a strip mall and an industrial park, to attend my first interview as a teacher of English and Social Studies. Despite my trepidation- and the distinct impression that I was overdressed in the company of potential coworkers wearing tie-dye shirts and cargo shorts- the halls through which I was ushered immediately began to exert their charm over me. Beneath the building’s unfinished façade lay the unmistakable signs of the care and personality which I would later come to associate so closely with the East Meadow mentality, remnants of cherished inside jokes between staff and students in the form of a hand-painted dinosaur wall mural, vividly colored rugs, and, most inexplicably, a laminated sign bearing the enigmatic legend “gummy bear mansion”.

The interview process proved no less unique and eclectic than the space. Although I had previously spoken with the program director, Lauren Collier, and the administrative assistant, Heather Perkins, over the phone, the variety and incongruous chemistry of the administrators, teachers, and members of the therapeutic support staff assembled made an immediate and indelible impression. The implicit respect among the staff seemed tangible and the fluidity of any apparent hierarchy, the freedom of each individual to craft and qualify the questions posed without judgment, marked this learning community as a breath of fresh air compared with the constrained and politically-charged environments I had endured while working at area public schools. I didn’t know it then, but this was to be my first taste of what would later be described to me as “normative culture”, the inherent decencies and modes of human interaction which have made so many, myself included, feel relevant and at home within the walls of East Meadow School.

My regard for all the individuals present at that table in late spring of 2017, and the courageous, tirelessly optimistic institution they strive daily to uphold, has grown manifold over the course of this past school year. I have watched my coworkers and their young charges again and again transmute even the most trying and terrible of days into constructive learning experiences for the entire community. I have had the honor of actively participating in the cooperation of educational liaisons, family members, government agencies, and mental health workers to form as holistic, heartfelt, and achievable a plan as possible for each and every student. Most impressively, I have experienced the boundless good humor and conviction that sustains the employees of East Meadow through this most trying and rewarding of tasks: uplifting an entire troubled community and its youth. The intimate size and ironclad cohesion of East Meadow School makes this possible to an extent I never could have imagined before working here. The school’s marriage of uncompromising vision with flexible and empathic methods has been a great inspiration to me both in my educational practice and personal growth, a testament to the program’s power to affect positive change not only in its students, but in every member of its growing community.

I entered East Meadow School a skeptic and am proud now, after a year of unforgettable trials rewarded by triumphs, to be a confirmed believer continuing in my service to its mission, methods, and spontaneous celebration of all the brightness that can be in our communities over the darkness that is.


Creative services focused on the unique needs, strengths, and values identified by the families and youths we serve.